Awesome, someone panelized (or whatever you call this) My favorite Emo Phillips bit

clicking on, may vary the scale 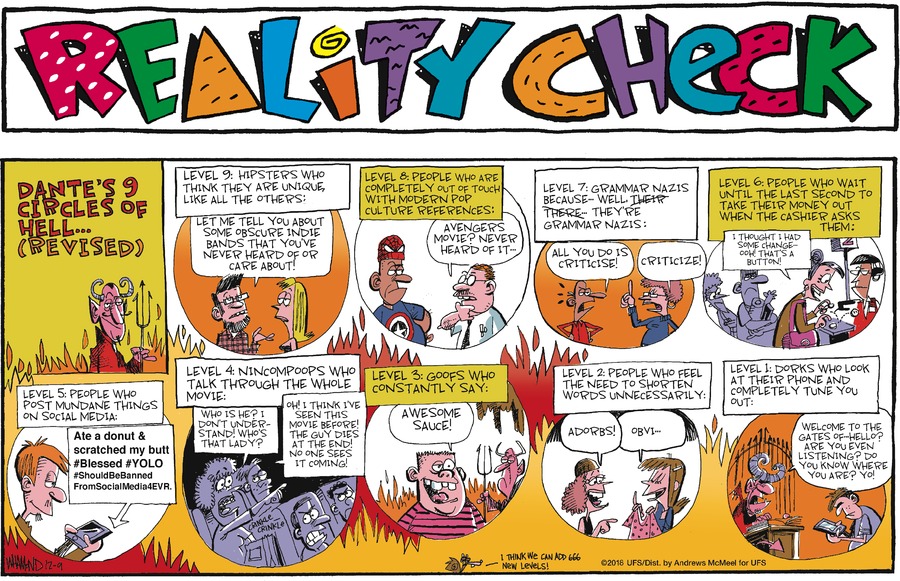 The light turned yellow as he approached the traffic lights. He did the right thing and stopped at the crosswalk, even though he might have beaten the red light by accelerating through the intersection. The tailgating woman behind him was furious and honked her horn, screaming in frustration, as she missed her chance to get through the intersection.

As she was still in mid-rant, she heard a tap on her window and looked up into the face of a very serious police officer. The officer ordered her to exit her car with her hands up.

He took her to the police station where she was searched, fingerprinted, photographed and placed in a holding cell. After a couple of hours, a policeman approached the cell and opened the door. She was escorted back to the booking desk where the arresting officer was waiting with her personal effects. He said, "I’m very sorry for this mistake.

You see, I pulled up behind your car while you were blowing your horn, giving the guy in front of you the finger and cursing at him. I noticed the “What Would Jesus Do” bumper sticker, the “Choose Life” license plate holder, the “Follow Me to Sunday-School” bumper sticker, and the chrome-plated Christian fish emblem on the trunk, so naturally.

I assumed you had stolen the car…"

Whenever I’m in trouble, I think, ‘what would Jesus do?’

Then I pretend to be dead and disappear for three days.