I hope someone has all this info gathered together in one place,

As a former intelligence officer who has served in several autocracies where spying on journalists happens regularly, this is chilling. We will become a “shithole” country under this president if we are not careful. washingtonpost.com/national-secur…

No withdrawal, 20 goons left and 130 goons stayed behind…

now the PPB is back to normal… here’s some REAL reporting, this is how this shit really goes down!

The story started at Laurelhurst Park, where in the early evening a group, reported to be about 200 people, assembled to protest racial injustice and police brutality. After discussion and a vote – classic Portlandia – the group decided to march to the nearby sheriff’s office, which used to be the Portland police southeast precinct and apparently is still used in part by the city cops.

There the marchers were met by helmeted, armed officers – I think they were sheriff’s deputies – who lined up in front of the building. The usual taunting ensued. Somebody in the crowd was hauling a mattress, and that’s a real trigger for the cops, apparently. I guess it is because some protesters are known to set them on fire.

Although the freelance journalists present say they didn’t see anything of the sort, before long the Portland police tweeted that someone had thrown bottles and pointed lasers at the officers. That set off a completely overblown, but not unfamiliar, police response.

A couple of vans full of Portland police showed up in riot gear. The Orwellian sound car also rolled in, with the DJ From Hell starting his high-decibel satanic mantras. “This is an unlawful assembly! Leave the area now. Move west on Burnside.” Over and over. Whatever the legal significance of these announcements may be, their actual message is, “We’re coming out there to kick your ass now, and we don’t have to follow any rules any more.” Nobody ever does what the DJ From Hell tells them to do. The whole thing is creepy.

Anyway, out marched several dozen Portland cops brandishing their batons and sub-machine guns. Nobody was throwing anything at this point; the protesters were standing in the intersection. But the police did their “bull rush” routine, in which they run right at the crowd, and anyone who can’t get out of their way fast enough gets thrown to the ground, hit with batons, sprayed with pepper spray, or all of the above. Sometimes even people on the sidewalks get whacked. It doesn’t matter if some medical condition or injury prevents you from running. If you don’t move fast enough, you get hit.

If there really was someone throwing bottles, or shining lasers at police officer’s eyes, do you think they were the ones who were beaten, maced, and thrown to the asphalt?

It gets worse. One person who identified herself as a member of the “press” had the tires on her car slashed (or shot out) and her rear windshield smashed as she was trying to drive away from the scene. Glass landed in her lap in the driver’s seat.

She was livid. She said the cops did it. No other story would be believable. Especially since the police were heard taunting and mocking people they had just knocked to the ground.

The cops weren’t satisfied to get the protesters away from the sheriff’s office. They bull-rushed them all the way through the normally quiet Laurelhurst neighborhood, with Mr. DJ From Hell belting out his loud, apocalyptic warnings, until they were all the way south to Stark Street, or maybe it was even Belmont. Along the way, a few sympathetic residents of the neighborhood handed out bottled water and washed the mace out of demonstrators’ eyes.

The police were obviously filming everyone assembled, and they scoffed at people’s press credentials. On both counts, the freelance journalists kept saying the cops were violating recent court orders. Honestly, I don’t think the Portland police listen to court orders, or any authority other than the police union. They kill unarmed, innocent people with impunity. Do you think they’re afraid they’re going to be punished over mere civil rights violations?

It isn’t just last night, but I have come to the conclusion that as a group, the Portland police dislike free speech, especially when it is critical of them. And they are not just willing, but eager – eager! – to hurt people. They are damaged goods from a psychological standpoint, and the opposite of smart crowd control. It really is a shame that the politicians can’t or won’t bring them to heel. 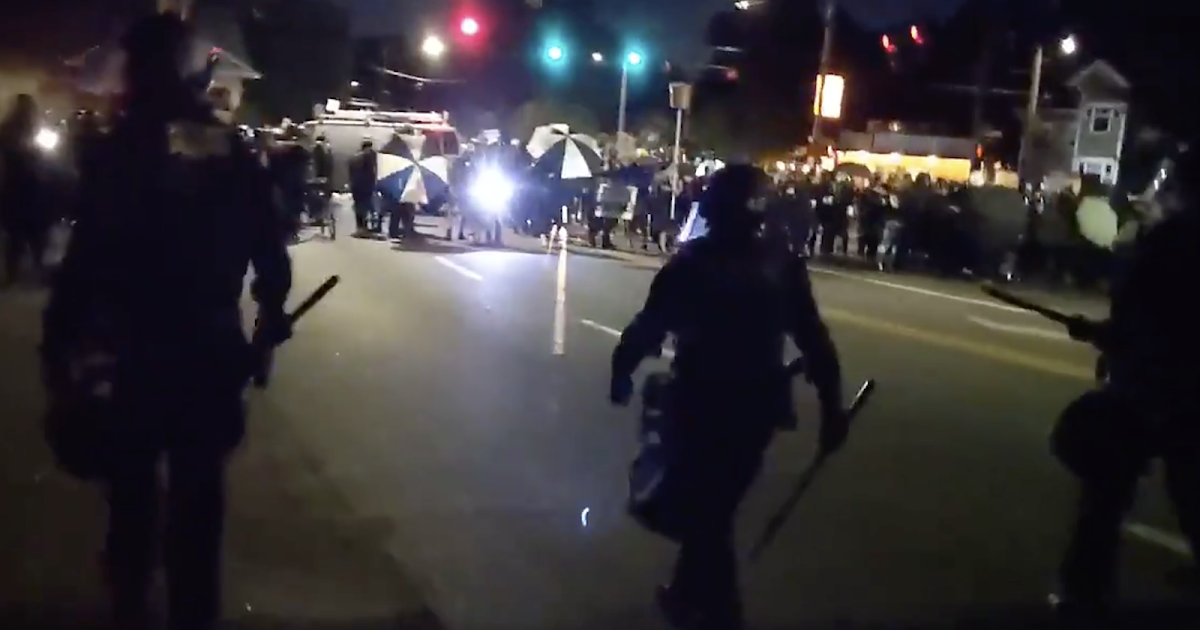 Portland cops at their worst at Laurelhurst protest

This week's Saturday night edition of The Portland Protests saw demonstrators and the local police back at it. In a nasty incident at the co...

Living in AmeriKKKa… Apparently Eugene police are pulling protesters out of their homes and charging them with rioting.

See ya’ll at the camps!

Dayum, in Eugene? There’ll be some lawyers all over that.

Eugene is considered to be the most libtarded town in the state.

Eugene is considered to be the most libtarded town in the state.

Seems far more right than Portland, Springfield might as well be Springfield, MO.